Knitting as Graffiti & Another Painting 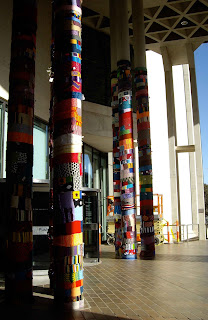 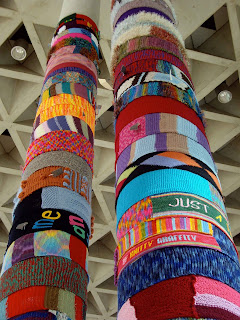 I still visit galleries quite a lot as there are so many in Canberra to see. Yesterday I saw something very unusual - it is using Knitting as Graffiti and here are a couple of photos I took at the Australian National Gallery where it was on display in conjunction with the Soft Sculpture Exhibition. People from everywhere, including a couple of my friends, have knitted scarf like pieces or used unfinished kntting projects, that are wrapped around poles and sculptures in the gallery garden. They are so colourful and fun - and unlike other graffiti can be removed easily without defacing anything. Apparently this is a street art phenomenon spreading around the world. 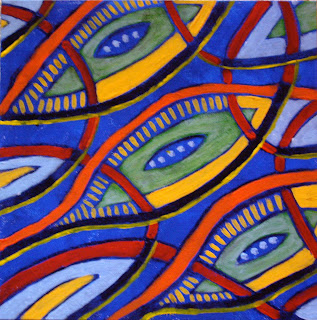 I was going to paint another still life using a blue background rather than the red one I had done earlier, but got sidetracked into a design with lines, shapes and colours as that is what I really like doing. It started out as leaf shapes on the diagonal - a lot of fun.

I've been spending more time on the computer than painting in the last few weeks but have just joined a Michael Winter's painting class called "Looking at Landscape" so will be going out to Strathnairn Art Centre where it is held every Wednesday Morning for the next 15 weeks. I must get outside and do my homework of a tonal sketch in pencil of part of my garden. A bit cold out there in July - ugh! Only 12 degrees today.
Posted by Ruth Lathlean at 22:02 2 comments

Ruth Lathlean
Canberra, A.C.T., Australia
In my working life I was a Geography and Photography teacher as well as a teacher librarian in high schools and colleges. I am now an artist working mainly in stained glass, photography, painting and tapestry weaving. I live in the beautiful city of Canberra, the capital of Australia. I hope to share some things that I enjoy with others.

I rode in one - very peaceful and great views